What is the old saying about Texas? “Everything is bigger in Texas!”. This saying now includes a particular type of knife, known as the Bowie Knife. The new edition to Bowie, Texas is the World’s Largest Bowie Knife, measuring an astounding 20 feet long. The blade itself is 14 feet 5 inches in length and made purely from steel. This spectacular sight weighs in at 3,000 pounds, good luck fitting this in your pocket. 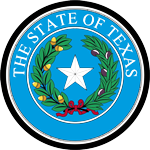 Governor Abbott signed Texas Senate Concurrent Resolution 7 on May 30, 2021, officially naming the Bowie Knife the Official Knife of the State of Texas. The resolution was sponsored by Senator Drew Springer and State Rep. David Spiller.

The idea of the ‘Bowie Knife Monument’ was pitched to the Bowie Chamber of Commerce by the late Bob Hadley, local rancher and bronze sculptor. Chamber Board Members Bryan Brown and Van Baize championed the project. The late Bob Brashear, a patriarch of one of the pioneering families of Bowie, became a major contributor to the project citing that he wanted to honor his parents, Marvin & Bess Brashear. Marvin was also known as “Mr. Second Monday” as he helped develop Bowie’s Second Monday Trade Days. Albert Schlabs of ASAP Water Jet Cutting, an engineering company, helped our Chamber develop and design the Bowie Knife monument and finally manufactured, constructed and installed the Bowie Knife unveiling it on April 4th, 2016. 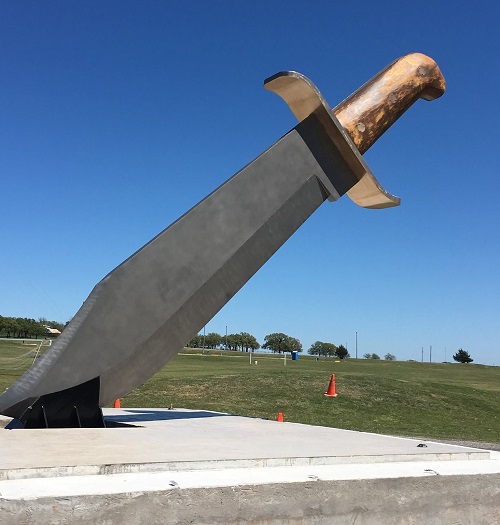 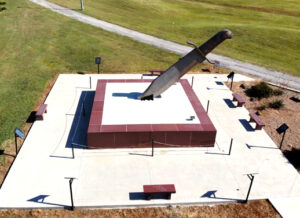 BE PART OF HISTORY

If you’ve ever dreamed of getting your name in the world’s most famous record book, this is your chance to do the next best thing! It’s not too late to have your name or memorial chiseled in granite. We still have tiles in all sizes available. Prices for tiles range from $250.00 to $550.00. Want to make a larger contribution? We still have a limited number of benches available for $5,000.00.